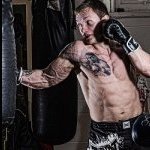 Beginner fighting in the ring in Thailand

By RB Coop, May 27, 2019 in Muay Thai Technique, Training and Fighting Questions