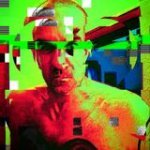 Best city in Thailand to go to fight for a big guy?