https://8limbsus.com/wp-content/uploads/2018/03/episode-4-2ITK_e04_-_Overtraining.mp3 You can download or listen to our 4th episode above, watch it on Youtube below, or subscribe to the Two Ladies in the Kingdom podcast on iTunes. –... 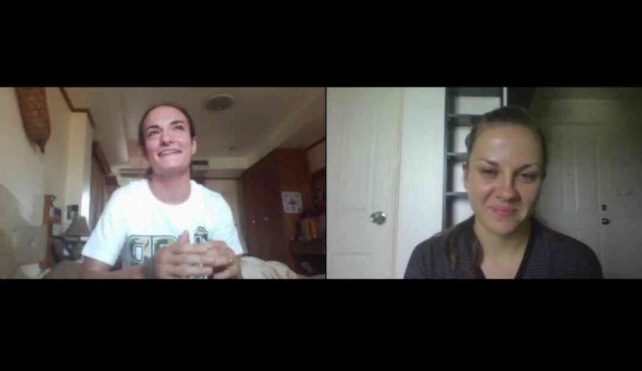 See All My Podcast posts: Two Ladies in the Kingdom

Emma is a 51 kg female fighter from the UK, living in Thailand for 5+ years. She also teaches English full time. She authors the undertheropes.com blog.

I’m a 46 kg fighter out of the United States, living in Thailand for 4+ years. training and fighting full time.

Our Podcasts are Broken Down in Segments:

Other Things in Our Lives – Emma and I are good friends, and we talk all the time about things other than Muay Thai. In this segment we share other podcasts or interests which may be of interest.

We’re doing something a little different this time around in the podcast. In previous episodes we’ve attempted to cover fight events that have been going on in Thailand, but quite often we’re listing names and results of women that people aren’t familiar with – and additionally this past month has been pretty quiet on the female Muay Thai front. But three Thai women are included in the Thai National Team for the IFMA World Championships in Sweden, Sawsing Sor Sopit (57 kg), Lommanee Sitchayanee (48 kg), and Loma Lookboonmee (45 kg). At the time of the podcast not a lot of results were in, but of the three only Loma medaled, taking Silver.

Emma and I, instead spending so much time on the fights individually we’ve decided to try out highlighting fighters as kind of a profile of sorts. So we selected Sawsing Sor Sopit of Thailand and Dakota Ditcheva of the UK, who was also fighting at the IFMA’s, in the Junior division and several weight classes above her own because there was nobody registered at 51-54 kg, so she actually took Gold at the 57 kg division. Dakota is 17 years old and the daughter of renowned former champion Lisa Howarth, and Dakota is undefeated as a professional fighter. We try to contrast and compare between these two fighters a little to illustrate differences between Thai and western fighting arcs:

Sawsing has been fighting since she was 9 years old, is now 20, and just has just launched her “comeback” to fighting after getting married and giving birth to her first child, a son named Winner. At 20 years old, she’s already at the end of her fight arc by Thai standards, especially for women, but she’s one of the most famous and well-regarded female fighters in Thailand during her career – I had the incredible opportunity to clinch with her – video here. Dakota is on the rise, having trained in Muay Thai and kickboxing for most of her life and just now getting into the bigger promotions – at 16 years old she’s absolutely on the young end of her already-impressive career. But both women come from families with fighters and training was part of their lifestyle and upbringing.

Sawsing was offering “live feeds” of the Thai National Team’s fights at the IFMA’s, until her phone stopped functioning, unfortunately. We talk briefly about her fights, first against a woman from Denmark who Emma and I have both trained with (and is good friends with Emma), Lea Pedersen; and then Sawsing advanced to a second fight against Sweden’s Patricia Axling. The fight against Axling was interpreted by the Thai team and media as having been ruled unjustly, which I can understand when looking at it from Thai scoring standards. However, on an international scoring interpretation, where all strikes score evenly, I can see how this fight was ruled in Axling’s favor. But the differences between Thai scoring and International Scoring are always highlighted in international fights. Here’s that fight: Sawsing (Thai) vs. Patricia Axling (Swe).

In the “what’s happening with us?” segment, Emma talks about her decision to find a new gym after a very disappointing event in which she fought and nobody from her gym showed up. She still fought and won, which you can read about in her blog post about the fight. I ask her a bit about the process of finding a new gym when she already has lived in Bangkok for many years and has an apartment and work, as opposed to the process of finding a gym when you are first touching down in Thailand and your options are far more open. Good luck to Emma! We’ll keep you updated on that in the next podcast. On my end, I was really excited to finally be put on the Fight Board at the gym, after 2 years of not being on there and with only one other western fighter having a slot there. It means a lot to me and I wrote about that in this blog post “The Fight Board – Belonging and Meaning in Acceptance”. But both between Emma’s disappointment of her trainers failing her and my rejoicing in the gesture of acceptance, the issue of how difficult it is to communicate directly and openly in Thailand with Thai people is a commonality between both stories.

And the “theme” of this podcast is Overtraining. I’ve written several blog posts on my take, which is summarized by the controversial take that Overtraining is a myth and under-recovering is the real problem. My most controversial article is “The Myth of Overtraining,” and here’s a list with all my articles on the subject. Emma also has a great blog post on the importance of active recovery and “Float Tank Therapy for Recovery and Mental Training,” which goes hand-in-hand with the topic of Overtraining, but doesn’t make a stand on whether or not that’s a thing. We discuss the mental aspects of both the symptoms ascribed to Overtraining and the mental aspects of recovery. Ultimately the issue is that people need to own their training, but we invite you to add to this discussion on the Roundtable Forum if you’re interested in doing so.

And lastly we revisit something we tried a few episodes ago, which is what media we consume in the form of podcasts, shows and books. Emma is reading a fantastically awful book that was left at her work, called “The Dice Man,” and has sent me screenshots of some of her favorite segments. That’s amazingly entertaining. I’ve just finished a TV show that I really enjoyed, based on the Soderburgh movie of the same name, “The Girlfriend Experience.” And we’ve both delved into a True Crime podcast (Emma got me into it and she’s handling it far better than I am) called “The Sword and the Scale.” I also listen to TEDx Radio Hour, but complain that I don’t like their new host. So… take that for whatever it’s worth.

2 Ladies in the Kingdom is sponsored by Lo-Bloo, which is the only female groin guard on the market that we’ve ever seen to be effective and comfortable. They also make male groin guards. You can order through Amazon.us or Amazon.uk (shipping anywhere in the world) and use our podcast’s promo code for a discount: SAVE2ITK – you can see my review of the Lo-bloo guard, even before they were our sponsor.