Fighting In the 2014 Queen’s Cup And Against Saya Ito

This is unbelievable. My friend Emma Thomas of Under the Ropes was kind enough to ask Master Toddy, with whom she trains in Bangkok, to find me a fight... 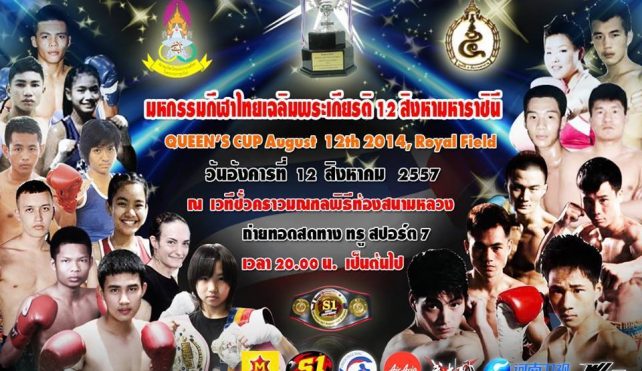 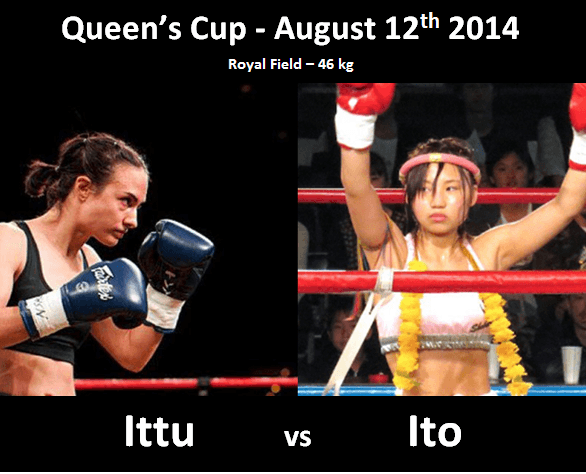 This is unbelievable. My friend Emma Thomas of Under the Ropes was kind enough to ask Master Toddy, with whom she trains in Bangkok, to find me a fight on the Queen’s Birthday in Bangkok.  For those who don’t know, the Queen’s Birthday is the biggest fight event for female Muay Thai in the country and it has been a dream of mine, one of the few concrete things I would want and the closest thing to fighting at Lumpinee for a woman (we are not allowed to fight at Lumpinee) – but I did not expect this.  I wanted to fight a fight on the Queen’s Birthday, in Bangkok.  As it turns out I’m fighting on the fight card, at Royal Park, and against an amazing opponent.  I spoke to the promoter two days ago, was thrilled at the news, but had to wait until it was 100% confirmed and I could inform all my trainers. This is going to happen.

Fighting for the Queen’s Cup

A lot of fighters from the west who are somewhat familiar with Thailand understand that Lumpinee and Rajadamnern stand as the pinnacle for fighters hoping to reach a level of prestige in Thailand.  Lumpinee is far more recognized as a name outside of Thailand and male fighters who travel to Thailand with dreams usually include the dream of fighting at Lumpinee.  Young Thai men dream of becoming Lumpinee champions, a title that goes in the history books here in Thailand.  But women aren’t allowed in those rings – we quite literally cannot touch them, let alone earn that particular prestige of having fought in or won a title of Lumpinee or Rajadamnern champion.

Every year, however, the birthdays of the King and Queen of Thailand are celebrated with grand events.  The Queen’s Birthday in particular offers opportunity for female fighters, who get the kind of television broadcasting and big show fights that are pretty limited throughout the rest of the year.  The Queen’s Cup is the most attended and widely broadcast event, taking place at Royal Park.  When I asked Emma to help me find a fight in Bangkok on the Queen’s Birthday, I imagined a moderately big show among many that is organized around the celebration of the Queen. It’s incredible. 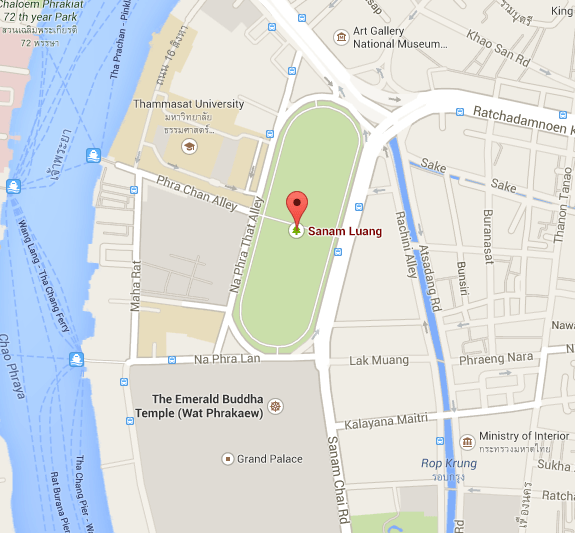 Royal Field, where the fights will be held. By the Grand Palace and the Emerald Buddha (above) 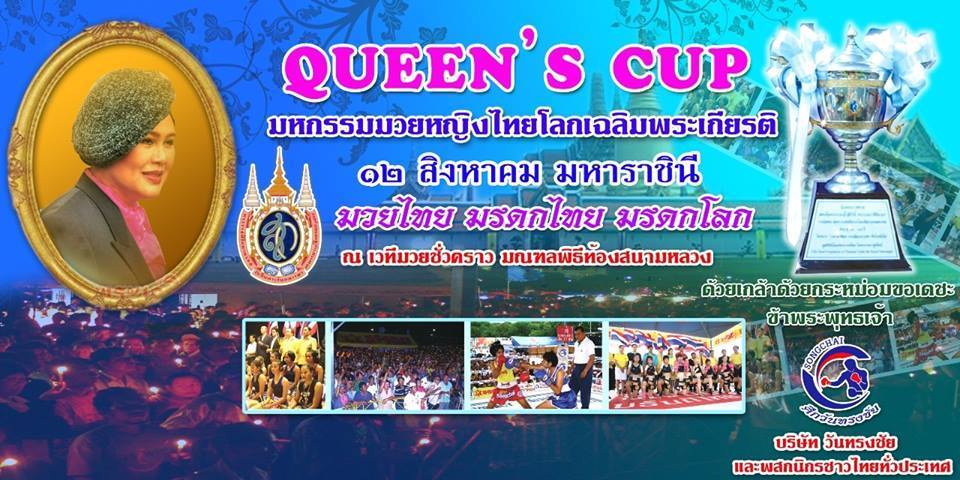 The event will be televised on True channel 7 at 8 pm, to not only Thailand but also China. It is not known though if our fight will make the televised portion of the card. These things are usually in flux. 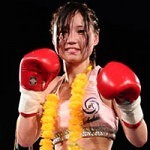 It is enough to say that I want to fight and beat the best in the world – especially at my own, proper weight, a weight I don’t fight at much.  (The majority of my fights are against opponents who outweigh me quite significantly; I’ve only had a  handful of fights at my true fighting weight of 44-46 kg.) And Saya Ito is right there at the top of that weight class. It may be her, Little Tiger and possibly Thailand’s Pizza at 100 lb (~46 kg) – the only women I have seen fight regularly at my weight recently for the WPMF and WMC titles (film is hard to come by, so there may be more fighters that should be on that list). Honestly, I really prefer to fight Thai fighters – as opposed to western fighters – because the Thai fight is a very particular art and a social-aesthetic expression, it isn’t just a set of rules (and no Bro, it isn’t about “kicking ass”). The fight in and of Thailand is something special. But some Japanese women really have come extremely close to Thai Muay Thai, developing a powerful respect for it not to mention high technical proficiency. They train heavily in Thailand and have Thai instructors back home. It feels really good to be fighting Saya Ito, who is lauded as the “young prodigy” of Japan. I have only seriously been fighting for a little over two years (69 pro Thai fights in that time), and it is an honor to be part of this and facing her.

Saya Ito is said to have nearly 100 Muay Thai (?) amateur bouts by the age of 14 – she’s 15 now – and it is said many of those were against boys, the same as my hero Phetjee Jaa O. Meekhun.  I believe this is extremely rare for a Japanese girl, if not unprecedented, though Thai girls with 100 pro fights by that age are far more common. PhetJee Jaa already has at least 160, at the age of 12, and by the age of 16 many Thai girls are near 70-100, depending on how you count them.

Ito notably won the WPMF pinweight championship belt on the Queen’s Birthday, as a 14 year old a year ago, against a fighter I really like, Pizza. As it happened, Ito then lost a WPMF interim title fight to another young Thai fighter, 15 year old Star Sor. Klinmee in Pattaya in December of 2013, a fight I did not see. A few months after that I very narrowly lost to Star, this past February in Pattaya. (Star will probably not return to this weight class, now walking around about 50 kg, I saw her last week). The good news is that Star is a clinch fighter, and it was probably the clinch that gained her the victory against Ito. My fight with The Star was a big clinch battle.

One of the more interesting sideline stories of this fight is that some are calling Saya Ito the Japanese PhetJee Jaa, who most would agree is the best young female fighter in Thailand. Looking at the possibility of them meeting in the ring anytime soon: PhetJee Jaa is only 12, Ito is 15. PhetJee Jaa is 33 kg, Ito is 46 kg. Maybe one day they will fight an epic battle, but any such fight would be a long way off. It is noteworthy though that I train with PhetJee Jaa and her family everyday at the O. Meekhun Gym, after my main training at Petchrungruang Gym. I face that absolute prodigy each evening. While I outweigh her by a good 14 kg, I have experienced her intensity and she is always hard to deal with. I’ll soon be in the ring with Japan’s prodigy.

I really could not ask for more than this fight. It is a chance to go out there against one of the best, in a dreamed for event, and explore where my skills have grown. I will bring my all to this fight, for sure, in celebration of all that Thailand has given me over the past two years, in celebration of female Muay Thai, and in celebration of Her Majesty the Queen of Thailand.  All I want is for my love and appreciation and intensity for all of this to be present in the ring with me and evident to those watching.  It’s a big ask, but it’s deserved.

If you are new to me, you can follow everything I do on Facebook and and Instagram. I put a lot up daily. And of course I blog heavily here on my site, you can subscribe to my posts below. I’ll be posting frequently around this event, that is to be sure.