It's been said to me countless times, "สบาย ๆ."  It means "relax," basically and it deals mainly with the aesthetic of Muay Thai and how it looks effortless, calm... 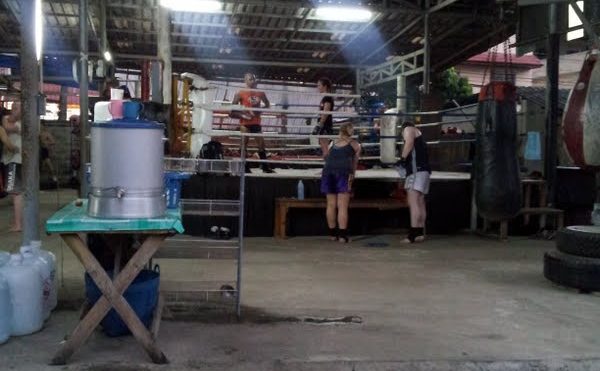 It’s been said to me countless times, “สบาย ๆ.”  It means “relax,” basically and it deals mainly with the aesthetic of Muay Thai and how it looks effortless, calm and flatly unemotional until it explodes in movement with flurry of strikes and then calms again.  But relaxation – in a sense that is not entirely grasped by my western concept of it – is also necessary for the actual practice of Muay Thai.  My coaches are telling me to relax against a mental tension which leads to hesitation, strain or aesthetically undesirable effort.

I laugh almost every time I’m told this because it’s usually after I’ve been punched in the face or failed to block something thrown at me.  I think I’m tense in the sense of muscle tension, which is needed to effectively block or deliver a powerful strike – a lax body is vulnerable.  But my understanding of what relaxing is and what I’m being told to do are different things.  When one is mentally relaxed there is a quickness of response – the leg comes up in a block before the mind even realizes the attack is coming.  A tense mind/body is looking while a relaxed body/mind is reacting.

I’m not good at relaxing.  The very suggestion causes me to tense; like being told to smile doesn’t make me feel “light” – it pisses me off.  But the connotation that relaxation has for me clearly has to be refined to the point that I understand it more to the point of its denotation, which is devoid of my personal (emotional) response to it.  I need to mentally release all the pressures I store in myself about performance and expression – when I write I don’t have a particular message I want to express; I just keep moving my fingers until the thing forms itself.  I connect the words and they shape the message and the entire process is an expression.  I need to fight this way – just keep moving and putting it together and the fight itself will be the expression.

In my last fight I was more relaxed, relatively speaking, than in fights prior.  I lost the fight on the inside fighting, which was precisely what I’d been working on since my last fight, which is disappointing.  That said, my clinch was improved from previous fights and I didn’t back up, which was the second angle I was working on this past week.

I’m able to hear my corner and my capacity for applying what they’re asking me to do is increasing with each fight.  I’m still getting caught up in my head though and the communications between my mind and body are certainly clouded by the introversion.  And I’m losing because of it.  This last fight was close and it could have appeared more in my favor if I’d expressed more control in my attacks.  I landed more strikes, but she landed higher scoring strikes.

The issue of relaxation, speed, flow and combinations all stem from mental awareness, calm and confidence.  As such, it’s incredibly hard to train it.  I’ve heard it said that faking a smile will (eventually) result in a real smile and lighter mood.  How do you fake confidence?  That’s not entirely a rhetorical question and I know that people fake confidence all the time, but it’s much harder to fool yourself than it is to fool others around you who probably don’t care too much.

Trying to retrain my responses from how I am already wired is an immensely difficult – and surely a long-term – task.  Relaxing in the context of combative art is not as simple as choosing to not flex a muscle.  Convincing yourself that you’re awesome when you’re losing all the time is not impossible, but it requires a level of generosity in belief and kindness that is more easily awarded to others than it is to one’s self.

Inner – The Difference Between Inside and Outside Fighting