There was a long (for me) gap between my last fight and this one due to having to wait for my stitches to come out.  I was really excited...
by Sylvie von Duuglas-Ittu January 12, 2013

There was a long (for me) gap between my last fight and this one due to having to wait for my stitches to come out.  I was really excited to get back in the ring.

We had three fighters on this card, Boy, Tor (who both live at the camp and have fought for Kiat Busaba since they were young children) and myself.  The stadium was still Kalare but it was set up across the parking lot, opposite from where it usually is.  That was kinda cool and a little weird at the same time.  Instead of setting up our mats against the back tarp we set up shop on the bleachers – bleachers! – which was pretty nice and all0wed me a better vantage point to watch the other fights.

I make about a million trips to the restroom before a fight and the guys at the front gate makes fun of me for it, but I’d rather be laughed at for peeing a million times than get teeped with a full bladder.  On one of my visits I passed by a girl with huge thighs and a hoodie, looking pretty short from her posture as I passed by and I knew that was my opponent.  I don’t know where she tucked herself away in the stadium itself because I didn’t really see her otherwise, but she seemed like a tough woman.

Tor won his fight in a really beautiful display of Thai aesthetic and composure, out-techniquing a much larger opponent.  He’s tall and lean, towering over most other Thais and has a very quiet, confident disposition.  He grew up at the camp; his father is Daeng, one of the trainers, and now that Tor is beginning University his father wants him to stop fighting but Tor wants to continue, from what I gather.  This disagreement between them falls away when Daeng is training Tor for a fight and the relationship they’ve shared at the gym for so many years takes over in a really lovely display of training being work, as well as a lifestyle.)  I was totally amped up on his fight and so proud that he had done as well as he did and gave him a fist bump as we passed one another in my procession over to the ring.

They played some crazy Thai metal music as I walked over and a bunch of westerners cheered and wanted to high-five, saying, “yeah America” or such things that people say and the announcer introduced me as having won my last 7 fights in a row.  I’m not sure that that’s true – my last fight was a draw – but I liked that they seemed to be paying attention to my progress even with my longer-than-usual absence from the stadium.

I climbed up into the ring and waited a while for my opponent to make it in.  Den told me to keep my hands up, which was a definite point of advice that I noted.  Normally he just says, “do your best,” which he also said, but he reiterated keeping my hands up a few times and once mentioned that it was especially important so that I don’t re-open the fresh scar from my stitches.

My opponent didn’t do a Ram Muay, which is not terribly odd but it’s been a while since I’ve fought someone who didn’t have a well-practiced Ram Muay.  Normally I can judge a woman’s experience by her Ram Muay, but this woman was definitely experienced (I think we had the same number of fights by what the announcer said) and just didn’t do one.

Within the first 40 seconds of the fight she had thrown and caught me with a right elbow, opening up a tiny cut on my scalp that I didn’t even feel but between rounds it was getting covered in Vaseline, so I knew it was there.  She was all about the leg kick and bashed my front thigh a number of times in the first round before I started trying to resolve it.  She got me pretty hard near the end of the first and I considered as I went to my corner after the bell that I could probably not take those throughout an entire fight.

Den wanted me to close in and knee.  He told me to knee and elbow, keep my hands up, and tire her out.  This is what I tried to do for the next few rounds, although I never threw an elbow until the fourth and I wasn’t turning her in the clinch so most of my knees were just taking small tolls in a collective approach, adding up some points, rather than really causing damage.  She kept throwing wild punches and elbows and in the 4th I landed a left uppercut on one of her right punches that made me really happy because of the work I’ve been doing with Neung (learning boxing) in extra lessons.  More of that, Sylvie. 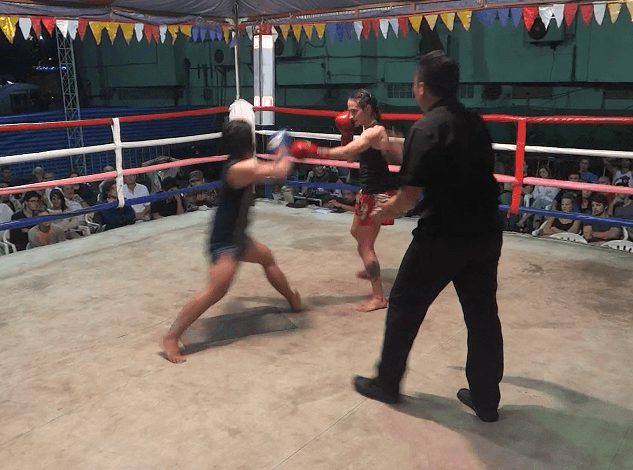 She was fading hard in the 4th and 5th rounds.  She got a standing 8 count that was mostly from exhaustion and then started going down on caught kicks, maybe so as not to get hit – I don’t know.  It’s customary in Thailand to touch gloves before the 4th round and hug before the 5th.  We’d been touching gloves at every round, but the 4th is a definite.  I was caught off guard when she attacked at the glove touch in the 4th, basically faking the touch to get a strike in (above).  I’ve never seen a Thai do this and I consider it a totally crap move – I never respect fighters in the UFC who I’ve seen do it – and that woke me up.  I should have really stepped on the gas and gone all out on those last two rounds, just taking her energy to the point that I could dominate completely and see how far I can go in my own reserves, but I didn’t.  It’s something to learn from and work on for next time.  It could have been a cardio blow-out, whereas I think this fight was pretty close until the last bit.

It’s an interesting progression I’ve seen in my time here in Thailand.  I started out fighting girls my size and sometimes a little smaller who are very defensive and technical.  They just ran from me, scoring sometimes a single point to keep them ahead and then protecting that point with defense and making me chase and look foolish.  I had to learn how to slow down, cut off the ring, find range and try to kick the body to score points.  Now I’m facing girls who are bigger than I am and they’re not afraid of my power, so they are coming at me and wanting to scrap, cause damage, or in this girl’s case finish me.  It’s a different game and now I have to strengthen my defense and close that range with more power.  It’s a perfect progression.  I’m motivated by what I learned from this fight to get back to training and improve on my strengths and weaknesses.  It’s a wonderful thing to be thankful for a tough fight and I look forward to more.